Sadly, like many prominent boxers, Evander has encountered multiple severe financial issues despite earning hundreds of millions of dollars during his career. Evander earned nearly $230 million in his career, without even adjusting for inflation. In 2008 he lost his longtime home to foreclosure. He was forced to sell off most of his assets to pay down different debts.

Born on October 19, 1962, in Atmore, Alabama, Evander Holyfield was the youngest of nine children. The family relocated to Atlanta, Georgia where he was raised in the crime-ridden Bowen Homes Housing Projects. He started boxing at age seven and won the Boys Club Boxing Tournament.

Holyfield made a big name for himself in the ring when he fought in the Heavyweight, Cruiserweight, and Light-Heavyweight Divisions. Young Holyfield qualified to compete in his first junior Olympics at the age of 13. At 15, he became the Southeastern Regional Champion, winning the regional tournament together with the Best Boxer award. 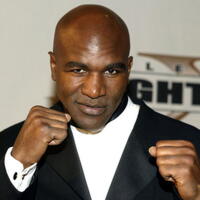 Evander Holyfield represented the United States in the 1983 Pan-American Games in Caracas, Venezuela. He got the silver medal and qualified for his first Olympics.

After winning the bronze medal in the Light Heavyweight division during the 1984 Summer Olympics, Evander Holyfield debuted as a professional at the age of 21. At the time, he was nicknamed “The Real Deal”. It was sometime in 1985 that he moved up to the Cruiserweight division, and won his first title the following year taking down Dwight Muhammad Qawi for the WBA Cruiserweight belt.

He then defeated Ricky Parkey and Carlos De Leon to fetch the Lineal, IBF, and WBC titles. Eventually, he became the Undisputed Cruiserweight Champion. In 1988, Evander Holyfield got his first win as a heavyweight, defeating Buster Douglas for The Ring, Lineal, WBC, WBA, and IBF titles in 1990.

Holyfield never experienced a professional loss until 1992 when he lost against Riddick Bowe. He recaptured the crown in a rematch a year later, defeating Bowe for the WBA and IBF titles but later lost them in an unexpected upset against Michael Moorer in 1994.

Evander Holyfield won in a now-infamous 1997 bout against Mike Tyson where Tyson was disqualified for biting off part of Evander’s ear during the fight. He was defeated in the WBA, WBC, and IBF titles against Lennox Lewis in 1999. He tried to win the World Heavyweight Championship on December 20, 2008 but lost a controversial majority decision to the then WBA Heavyweight Champion Nicolay Valuev in Sweden.

Holyfield retired in 2014 and ranked 77 on the Ring’s list of 100 greatest punchers of all time. He had a career record of 44 wins (29 knockouts), 10 losses, and two draws. In 2017, he got inducted into the International Boxing Hall of Fame. Currently, Holyfield ranks 9th in BoxRec’s ranking of the best and greatest pound-for-pound boxers of all time.

After retirement, he served as advisor and mentor to heavyweight hopeful Zhang Zhilei.

Evander Holyfield launched Real Deal Records which signed the one-time success group Exhale, among several other groups. Holyfield had already become a household name by 1992 since he endorsed many products in commercials for Diet Coke and Coca-Cola. He also featured in a video game for Sega Genesis: “Evander Holyfield’s Real Deal Boxing.”

He is among several celebrities to do ads for the restaurant chain Zaxby’s. Evander Holyfield carried the Olympic torch in 1996 when it was heading to his hometown of Atlanta, the host for that year’s games. In 2007, he introduced a line of cooking products, Real Deal Grill, through infomercials.

Over the years, Evander has made many television appearances with his first being a cameo on the 1990 Christmas special of “Fresh Prince of Bel-Air”. He also featured in three movies in the ’90s: “Necessary Roughness”, “Summer of Sam”, and “Blood Salvage”, which he also produced. Interestingly, he also made a cameo on Nickelodeon’s GUTS in 1994. 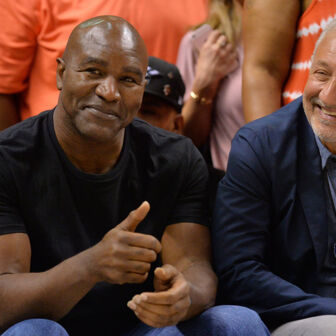 In 2005, Evander Holyfield appeared on “Dancing with the Stars” and came in fifth place with his partner Edyta Sliwinska. In January 2014, he became the first housemate to leave the UK “Celebrity Big Brother” after he made derogatory remarks about a homosexual roommate. Two years later, he was featured on the Argentine reality dance show, “Bailando”.

Just like Mike Tyson, Evander Holyfield somehow managed to blow through a massive fortune that at one point peaked at over $200 million. In his career, Holyfield earned around $230 million in prize money alone. Sadly, all that money was gone by 2008 when his 109-room Atlanta mansion was lost to foreclosure.

This incredible mansion was 54,000 square feet on 234 acres. The house cost over $1 million every year to maintain. After it was foreclosed, the house sold at a public auction for $7.5 million. Regrettably, Evander owed a bank more than twice the amount for the house’s mortgage. In January 2013, he also owed several hundred thousand dollars in back taxes to the IRS.

A majority of Holyfield’s prized possessions have been sold at auctions over the years to cover many debts and obligations, including his Olympic bronze medal, 20 pairs of fight gloves, championship rings, belts, and 25 match robes and shorts.